Anil Kapoor's pretty daughter Sonam Kapoor's wedding with beau Anand Ahuja on May 8 will be anything but ordinary. Ever since the to-be-wedded couple's respective families confirmed the news of their marriage, social media is abuzz with all the intricate details of their wedding.

The bride-to-be Sonam also has been openly sharing videos and pictures of the wedding gifts she is receiving from her admirers whereas her celebrity friends are preparing for 'Veere Di Wedding' actress' star-studded sangeet which is to be held a day before the nuptials.

Daddy Kapoor's Mumbai residence is all decked up like a new bride eluding big fat wedding feels. Spread through the span of two days, Sonam and Anand Ahuja's wedding functions will be held at Mumbai's Bandra Kurla Complex, Bandra Bandstand and The Leela hotel.

Unlike most newlyweds, Sonam and Anand won't be escaping their busy schedules to embrace their new-formed relationship but would wait till October-November due to their prior commitments. The actress will be leaving to attend Cannes at the French Riviera immediately after the wedding. 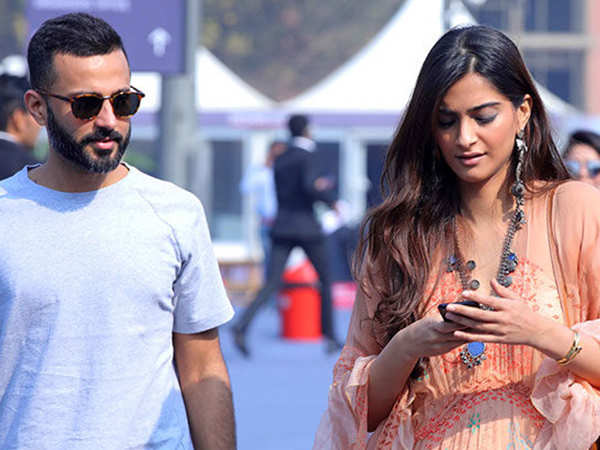 Anand reportedly won't be joining his new bride in France. The newlyweds would be shuffling between the groom's Mumbai, Delhi and London homes post marriage whereas Sonam will indulge in 'Veere Di Wedding' promotions soon after the marriage.

Sonam is often termed as Bollywood's fashionista due to her distinctive style statement and sense of fashion. The actress has posed and walked the ramp for ace designers through the years but her favourites are the 3 As comprising Anamika Khanna, Abu Jani-Sandeep Khosla and Anuradha Vakil.

As per India Today reports, Sonam will be wearing dresses designed by the three designers for her sangeet, wedding and reception. Meanwhile, the charge of groom Anand Ahuja's wardrobe has been given to designer Raghavendra Rathore.

Sonam and Anand have never acknowledged their relationship publically but their occasional PDA pictures and public appearance gave away their love for each other. The actress is not the one to shout out about her personal life and likes to keep it as private as possible.

In an interaction with Firstpost, Sonam revealed, "This is a rule that Anand has actually put on both of us. Basically, right before I go to sleep, I put my phone in the bathroom. I charge it in the bathroom or the other room or the hall. I don't even have any notifications on my phone."

The bride-to-be will have many celebrities performing at her sangeet including the ace filmmaker Karan Johar, who is planning to gift the actress a beautiful Kanjeevaram saree along with Amrapali Jhumkas and chandelier earrings along with a sweet hamper for her wedding.

Ranbir Kapoor's sister Riddhima Kapoor Sahni gifted the actress an emerald bracelet, which the bride-to-be flaunted in her Instagram story. The actress has been receiving gifts and well-wishes from her admirers and renowned labels ever since she confirmed getting married.

Sonam Kapoor and businessman Anand Ahuja, who owns label Bhane have been dating for a few years now but only made their relationship public in the last month of 2016. The 'Neerja' actress is marrying the love of her life on May 8 as per Sikh traditions.