Sonam Kapoor and Anand Ahuja are married. They got hitched in an intimate affair at the bride's aunt's home in Bandra with Sikh traditions. Celebrities including Aamir Khan, Ranveer Singh, Karan Johar, Karisma Kapoor along with the Ambanis reached to attend the union.

Forever and ever. Sister love is the truest love I know. Me and Sonam Kapoor-Ahuja ????

Bollywood fashionista got ready to write a new chapter of her life with beau Anand Ahuja starting today. If Sonam Kapoor's pre-wedding festivities were infectious, the nuptials and reception are expected to be extraordinary, especially with the bride looking that beautiful.

Sonam's millions of fans were eagerly waiting to scrutinise the Fashion queen's bridal outfit with bated breath and they won't be disappointed. Clad in a red outfit for her phenomenal wedding with the handsome Anand Ahuja, our pretty bride is breathtaking, literally!

If the bride is looking mesmerising in her bridal outfit, the groom is no less in his golden sherwani with a ruby contrast mala. The lovebirds are tying the knot as per Sikh traditions in Sonam's aunt's bungalow in Bandra. Anand Karaj is scheduled to take place between 11 am to 12.30 pm.

While the wedding ceremony will be attended by close friends and family only, the reception to be held in evening at the Leela will, without doubt, be a star-studded affair. Bride's father Anil Kapoor was spotted outside the venue greeting the invitees in an ivory sherwani.

Sonam's cousins Arjun Kapoor and sisters - Anshula, Janhvi and Khushi along with her close friends, Jacqueline Fernandez, Kareena Kapoor Khan with hubby Saif and Son Taimur along Swara Bhaskar reached to attend her wedding nuptials along with other family members. Her brother Harshavardhan Kapoor looked emotional at Sonam's big day. 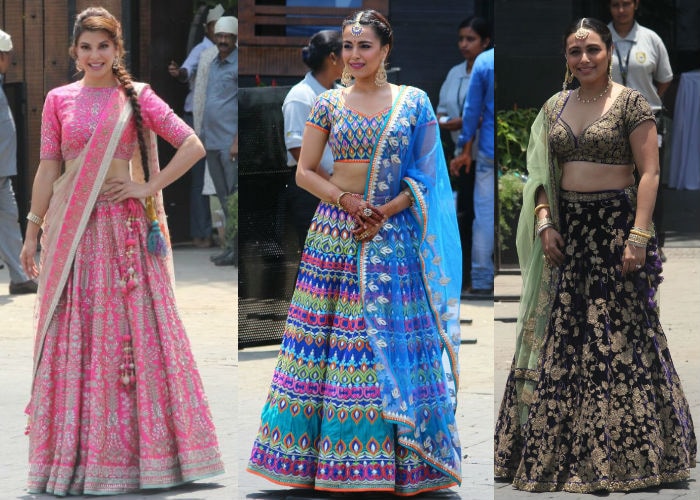 Sonam and Anand's wedding festivities kick-started over the weekend with an intimate Mehendi ceremony at Anil Kapoor's Juhu residence followed by an official Mehendi function, combined with Sangeet and Chooda ceremony at the couple's love nest Sunteck, Signature Island on Monday.

A post shared by Harshvardhan Kapoor (@harshvardhankapoor) on May 7, 2018 at 6:36am PDT